Unlike for the yucca moths, very little is known about the parasitoid species that attack yucca moths. The first records of yucca moth parasitoids were made at the same time the yucca moths were described in the late 1800’s. Since this time, almost no research has been conducted on the systematics or the ecological influences that parasitoid attack may have on the pollination mutualism. Most of the current knowledge comes from natural history notes contained in monographs or articles about yucca moths as well as observations made by yucca moth researchers. Michael Thomspon’s Master thesis in 1980 was the first scientific study directly solely at yucca moth parasitoids. Subsequently, Don Force and Michael Thompson published “Parasitoids of the immature stages of several southwestern yucca moths” in 1984. This article incorporated data from Thomspon’s thesis as well as additional information on the parasitoids of other yucca moth species. This is the most comprehensive work to date on the yucca moth parastoids.

Force and Thompson (1984) as well as a number of yucca moth researchers proposed that the parasitoids species they found were likely species complexes, a pattern that is true for the yucca moths. I am using host use patterns, morphology, and molecular markers to determine if indeed the parasitoids of yucca moths might be species complexes. The final goal is to compare the pattern of diversification for both yucca moths and their parasitoids to test hypotheses about coevolution, phylogenetic tracking, and host switching in parasitoids. This material is based upon work supported by the National Science Foundation under Grant No. 0321293

There are currently six genera representing three hymenopteran parasitoid families that are known to attack yucca moths. Many of the species have only been reared from yucca moths and may be yucca moth specialists.

Dave has assembled the current information available on each of the parasitoid species that is known to attack yucca moths. The information comes mainly from work by Michael Thompson and Don Force (1984) and personal observations by Olle Pellmyr and myself. Please feel free to e-mail me with additional information or comments you may have. This website is work in progress and I will add to it as we accumulate more information about yucca moth parasitoids. Special thanks to Michael Thompson for permission to use his photos! 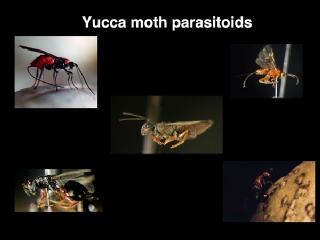 Click on the links below to learn more about each genus.